What is Organizational Culture - A Five Part Model

Pulling Back the Curtains on Organizational Culture

The Model That Builds Organizational Cultures

What is Organizational Culture?

Part 1: The Business need that will drive team performance

This sounds simple enough, but it is stunning how many companies do not understand their basic identity and the value they deliver to their customers. For example, there are two transportation agencies within the same state government. They are both agencies that fund transportation infrastructure. However, the cultures within each agency could not be more different. One agency sees its business as funding transportation projects that will increase public safety. Therefore, the opportunity to save lives is a high motivation for employees. In contrast, the other agency believes it is funding transportation infrastructure that will improve access. However, it has fallen into the trap of seeing its primary role as regulatory. Since much of the money they distribute is federal, they have evolved into an organization whose primary job is to oversee federal regulations so they do not get penalized. The difference is nuanced, but the impact on organizational culture is massive. The nobility of saving lives drives the culture of the first agency. The second agency assumes has evolved into a culture that has become self-protective by correctly interpreting federal regulations so they do are not penalized.

The impact on the employee experience is transformative. Employees in the first agency, are engaged by the nobility of saving lives. In contrast, the experience of employees in the second agency becomes one of completing tasks designed to maintain the status quo. Employees who question the status quo are immediately a threat. Creativity and innovation are squashed as they represent a threat to the regulatory identity. Therefore, employees can leave their creativity and ingenuity (the best part of the human being) at the door.

Part 3: The role of leaders Within the Company

We all play different roles throughout the day. For example, a woman will play the role of mother, wife, federal prosecutor, and community volunteer – all in one day. She moves from one role to the next with hardly a thought. Much of this is based on her identity. In the same way, a leader in transportation agency #1 will see their role as a creator of value for their customers. Their company culture that focuses on saving lives propels them to get better at every level. Thus they are constantly developing new skills in their staff, looking for ways to improve processes and create procedures for organizational learning. In contrast, leaders in agency #2 will see their role as protectors of a stagnant culture that protects federal assets. Therefore, there is little need to develop the workforce, improve processes, or design organizational learning procedures.

Part 4: The Daily Practices of Leadership

Part 4.A. Designing Values That Will Drive Behaviors

Values drive all behaviors that support organizational culture. They may be the espoused values or not. But they will be the actual values that make up the real organization drive organizational behavior. High impact organizations realize this and expect their leaders to model corporate values by their behaviors. For example, if a company is developing a culture that respects diversity and inclusion yet is leaders are not called to account when they ignore diversity and inclusion, the culture will suffer.

Part 4.B. Routines and Ritual

Organizations are as much about routines and rituals as people. Aristotle reportedly said: “We are what we repeatedly do. Excellence, then, is not an act, but a habit.” Routines are the institutional muscle memory that creates keystone habits. These habits are the support structure for organizational culture. For example, the U.S. Army and the Marine Corps have built the simple routine of eating last into the daily practice of its officers. In this way, they reinforce the core value of “selfless service,” which the army defines as, “putting the welfare of the nation, the army, and your subordinates, before your own.” Therefore, the routine that requires the highest-ranking officer to eat last in the cafeteria is a simple way of reinforcing a culture of servant leadership.

Every organization and culture has rules. Anyone who has traveled in Asia understands that the rules of personal space is different than in the west. For a company, the most important rules are the unwritten rules and who makes them. For example, the first consulting firm I worked for had a rule that did not appear in any employee manual. It was just understood that no personal effects should be on our desks. They did not want clients, to see family photos in personal work areas. In spite of the fact that clients never came to our offices. Since the CEO was way of in his company C-Suite and nobody could remember who made the rule, everybody put all the family photos in their personal workspace they wanted. The value of rules is to reinforce and align them with the culture. For example, one of the safest hospitals in the nation has a rule – leaders are NOT to become problem-solvers for their staff. They are developing a culture of patient safety and they want their front line staff to have the confidence that they can solve the problems of patient safety. When leaders take on the role of problem-solver, they rob their staff of this empowerment and the joy of creating an environment of patient safety.

Every culture comes with a system of rewards, whether intentional or not. For example, a manufacturing company with a culture of “production at any cost” will have a reward system that focuses on maximizing production. Unfortunately, this reward system may lower the value of employee safety. Conversely, another manufacturing company may have a system of rewards that focuses on employee safety. As a consequence, employees reward their employer with greater productivity at lower cost and higher quality.

Part 5.A. Rewards and Recognition for staff

Rewards for staff, are all too frequently, disconnected from the culture. In many cases, outside the monthly paycheck, there are no rewards at all. Bonuses are nice, but they often reward staff for production and keeping costs low. However, a manufacturing company I profiled in “Leveraging the Genetics of Leadership” rewarded their workforce with Paid Time Off (PTO) for finding and eliminating waste in the manufacturing processes. In doing so, they were intentionally supporting their culture where staff are the front lines of maximized value for their customers.

Part 5.B Rewards and Recognition for leadership

Similarly, culture is often disconnected from the rewards for leaders. If the only rewards leaders receive are based on production, then production is what they will get.

For example, in 2011, an iconic hospital in Seattle, Washington, was acquired by a larger healthcare system. As a result, they began an overhaul in the system that had built a culture of patient safety and community care. One part of the overhaul was changing the salary structure of surgeons in the Neurological Institute. In an effort to get more surgeries, they compensated surgeons with bonuses for their surgical revenues rather than putting the bonus money into a pool to be shared. As a consequence, surgical revenues skyrocketed. However, in 2016, the local newspaper exposed the abuse, unprofessional conduct, and actual harm to patients. Consequently, the director was forced to resign and lost his license to practice medicine. In addition, the CEO resigned, and the parent company took out a full-page ad in the local newspaper apologizing to the community, patients, and staff.

As Jeffrey Pfeffer of Stanford University writes, “When leaders’ own jobs and salaries depend on how well they look after others, they will do so.”

Daniel Edds, MBA is a management consultant who supports high-impact organizations to develop courageous cultures. He is the author of two books. The most recent is titled, Leveraging the Genetics of Leadership, cracking the code of sustainable team performance. This book documents how high-impact organizations transform their cultures to engage the full breadth of the human opportunity, teams that build community while also delivering unparalleled customer value. In addition, Dan serves on the boards of several community-based nonprofits. 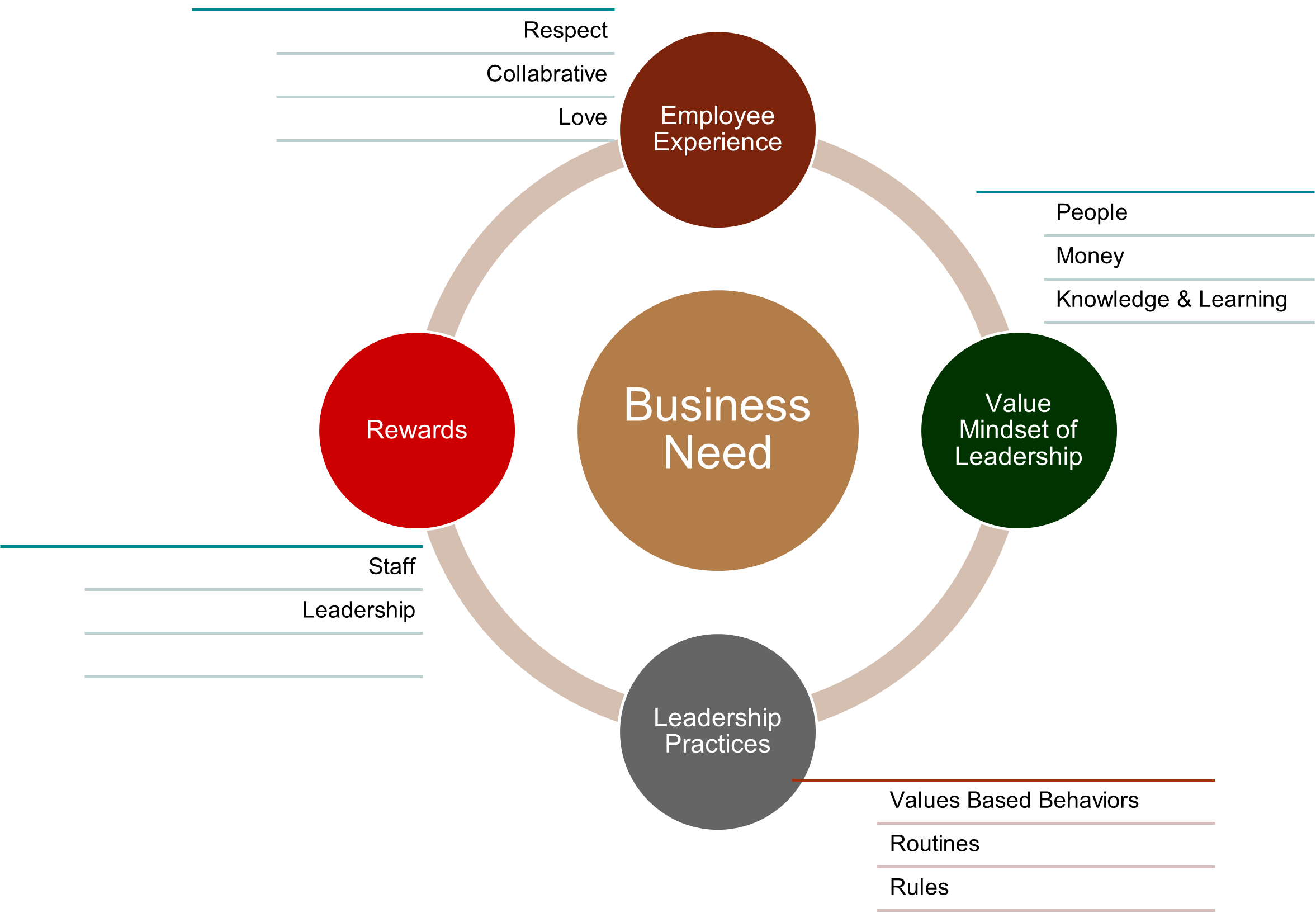 Daniel Edds
Leadership to Unleash the Human Capacity for Innovation
My mission is to demonstrate how elite organizations are creating high-impact cultures by designing platforms of leadership. Platforms that unleash the human capacity for creativity, innovation, and transformation. It is revolutionary leadership