"Diversity Stew"- How to Create Your Own Recipe of Tranquility

I was debriefing a small group after they experienced one of our culinary team building programs, Team Tapas™. Their team building debrief question was simple, list the benefits of working as a team today and share with everyone how these learning opportunities can be positively applied to your office immediately?

The first team recognized that collaboration was key to the success for them creating their Belgium Endives, filled with a curried flavored chicken, Bartlett pear and dried cherry salad. They commented that individually, they never made such a flavorful dish as this and through collaboration with their cooking team, it made the task simpler and much more fun. So they made a commitment to each other that they would look for collaborative opportunities that would increase quality and production in their office.

The next team made a similar connection with each other but with a different topic, trust! They continued to share that without really knowing each other, that it was hard to trust in each other. They felt that this exercise was the first step in getting them to learn more about how each person “ticks” and they adopted a saying that said, “Assume the Best (instead of the usual, “Assume the Worst!”)

This wave of self discovery continued around the room until we got to the last cooking group. They were a smaller team of three and two of them worked together on a regular basis and had a very special bond that they thought was a distingue advantage over  the rest of the office. They had learned similar aspects of cooking together but could not seem to understand how they could apply any of these concepts back in the office.

They said, “The connection that the two of us have (remember the two office mates that regularly worked together) is so special and I don’t know how that matters to the rest of the office. Our connection is so strong that it’s pales in comparison to any other relationship in this office group. What’s the benefit of us all working together? We seem to be doing just fine by ourselves!”

The whole office group froze in their tracks upon hearing those words. It wasn’t necessarily negative in nature, but it did conflict with the basic message of the day and the self discovery of their appetizer making team building.

“Of course, they replied. But what does that have to do with working as a team?”

“What ingredients do you use in making your stew?”, I asked.

“Great!”, I replied. “And have you ever made a beef stew with just beef?” I said with a grin.

“Of, course not, that would be missing all the ingredients that make a stew a stew.”

So I then continued, “Of course that would be lacking, a beef stew with just one ingredient, that’s just silly and lacking of what it’s full potential could be as a savory dish. But that’s exactly what you are missing when you only focus on the two of you and how you work together in the office. Like a stew with just beef, it’s would fill your belly and take away your hunger. But you would miss the complimentary vegetables, spices and seasonings that would make your stew complete.”

I continued saying, “Imagine if the rest your comrades in the office were the onions, the celery, the carrots, the potatoes and all that other stuff. And you were put together and simmered until you no longer represented the individual ingredients of beef, onions, celery, potato, spices and seasonings but rather you have transformed into something special and unique. You have transformed into a collective of different personalities all focused on one direction and contributing towards becoming a complete new entity that we like to call TEAM!”

So I challenge everyone reading this article to embrace the differences in the people around your office, your company or department and take a chance of creating and realizing your own potential as a unique, high functioning blended team. You will benefit from the various perspectives and skills that each person brings to the table, that when combined, create an opportunity to overcome just about any challenge.

Oh, and you’ll never look at a bowl of stew quite the same again!

To learn how you can have CEO Chef facilitate your next cooking team building program, just go to http:CEOChef.com! 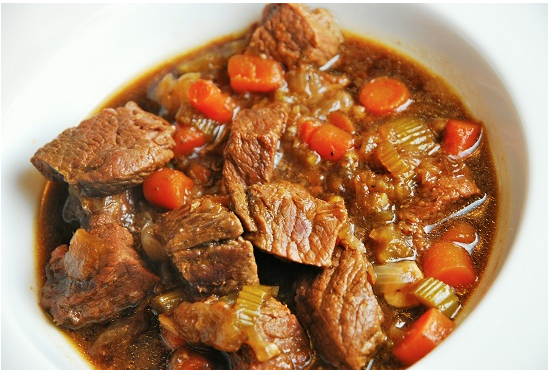 Jim Connolly
Realizing Your Greatest Potentials
As Featured on NBC's The Doctors TV Show, CEO Magazine and The New York Times, Team Building Authority, Author and Inspirational Speaker Reveals How to Find Your Happiness, Fulfillment and Abundance at Work, Home and Play!